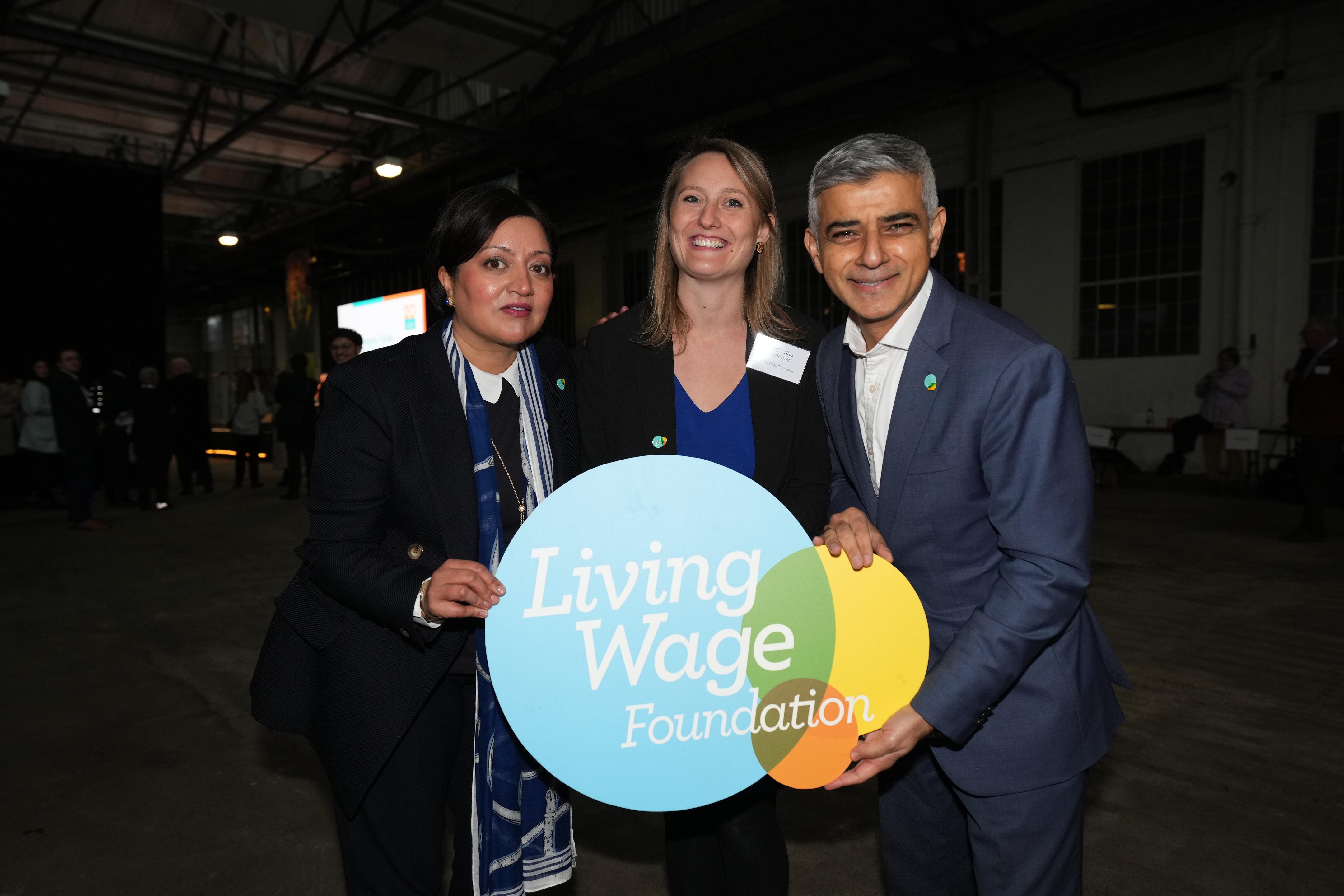 Mayor Rokhsana Fiaz welcomed the Mayor of London and Katherine Chapman, the Director of the Living Wage Foundation to The Royal Docks on Monday November 15 at the start of Living Wage week

Mayor Rokhsana Fiaz welcomed the Mayor of London Sadiq Khan and Katherine Chapman, the Director of the Living Wage Foundation to The Royal Docks on Monday November 15 at the start of Living Wage week, which runs from 15 to 21 November.

The event marked the twentieth anniversary of the Living Wage movement which began in Newham in 2001. This event is usually held in a central London location but this year the Living Wage Foundation chose to hold it at The Factory, on the Thameside Industrial Estate.

On the day when the new Living Wage rates of £11.05 for London and £9.90 for the UK were announced, the event marked the start of Living Wage week - and celebrated the commitment that Newham Council has made to pay at least the London Living Wage to directly employed staff (including Apprentices) and is phasing it into all regular third party staff whenever contracts are extended or renewed.

In February 2021, Newham council was declared a Living Wage employer and became officially recognised by the Living Wage Foundation. The accreditation was a key milestone in delivering Newham Mayor Rokhsana Fiaz’s pledge that the council should lead by example to tackle inequality and promote fairness in the borough.

The accreditation is part of a broader Community Wealth Building agenda which is being pursued by Mayor Fiaz and her administration to tackle poverty and inequality in the borough. It will help ensure that local economic activity benefits local people, promoting their health, wellbeing and happiness.

Other speakers at the event included workers from organisations and businesses that will personally benefit from the Living Wage, Caroline Verdant from the charity Citizens UK, the Bishop of London and Sister Una, a veteran of the Living Wage campaign who was moved to start campaigning for decent wages when she was a head teacher in Newham.  She has campaigned on the issue for over 20 years.

Mayor of Newham Rokhsana Fiaz said: “The right to fair wages for all local people is at the heart of our plans for building a better Newham.  My ambition is to make Newham a place where all people are paid what they deserve so they can securely enjoy a good life.

“The people of East London have always been at the forefront of standing up for their rights at work for over 125 years since the ground breaking fights by the Match girls, Dockers and Gasworkers and it is no surprise the Living Wage campaign started here.  As the elected voice of the people of Newham I stand proudly in the tradition speaking up for better rights at work and that why Newham has a Community Wealth Building policy with paying people fairly at its the heart.

Hearing the testimonies of workers about what it means to them and their families is inspiring and absolutely central to today’s event. I’m proud that we are hosting this keynote London Living Wage event here in Newham during Living Wage week.

“I celebrate the newly accredited Living Wage employers who are here today  and  appeal to all employers in Newham in Living Wage week to commit to follow our lead and pay the new London Living Wage to their employees. “

“But I am determined to make sure that our city is fairer and more equal post-Covid. I’m proud that the number of organisations paying the London Living Wage has quadrupled since I became Mayor, but there is more to do while low pay persists in our economy. That’s why, today, alongside the new London Living Wage rate, I’m announcing the ambitious aim of making London a Living Wage City Region.

"Boosting the incomes of the lowest-paid key workers makes sense – it’s what is best for the employees and their employers, as well as productivity and the workforce as a whole. When London prospers, so does the rest of the U.K. - and vice versa. I hope that regions across the country follow our commitment to paying a decent wage for a day’s work.”

Katherine Chapman, Director, Living Wage Foundation said: “We all need a wage that meets our everyday needs, even more so when living costs have been rising so sharply. The last 18 months have been particularly tough for low paid workers in our capital, despite working in jobs that kept us going throughout the pandemic. Today’s new Living Wage rates will provide thousands of Londoners with greater security and stability.

“London is the birthplace of the Living Wage movement and almost 2,500 London firms have signed up to the Living Wage in the last ten years. Today’s plans to make London a Living Wage City Region mark the next stage in our campaign to ensure that more Londoners can earn a wage to live with dignity.”