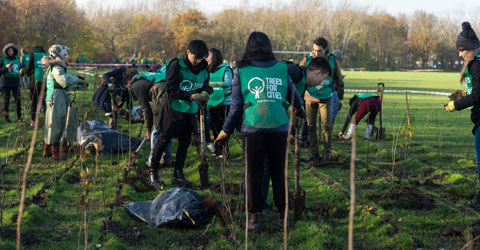 The event, to mark National Tree Week, was held by Newham Council in collaboration with The Mayor of London and the charity Trees for Cities and attracted Newham residents, community groups and volunteers from across the capital.

National Tree Week runs from 23 November to 1 December with Londoners urged to get involved in tree planting at events across the capital.

Newham Council’s contribution to the Beckton South project was £20,000 with £40,500 coming from the Mayor of London.

This year Newham Council declared a climate emergency and launched the Newham Climate Now campaign to ensure the council and all its services are working to create a safer, cleaner and greener environment.

Jamie Blake, Corporate Director of Environment and Sustainable Transport, at the London Borough of Newham said: “This is a fantastic initiative which will see 9,000 new trees planted in the borough, and it is not just decorative, as trees play a vital role in the battle to tackle the climate emergency.”

London Deputy Mayor for Environment and Energy, Shirley Rodrigues, said: “It’s fantastic to see so many residents, community groups, charities, schools and others coming together to plant thousands of trees – part of the 100,000 that will be planted this winter with City Hall support. We’re urging thousands of Londoners to roll up their sleeves and get involved in a local planting event to not only make their communities a more beautiful place, but improve health and wellbeing for all.”

David Elliott, Chief Executive of Trees for Cities said: “The urban woodland habitat in Beckton District Park South will create natural spaces where local people can enjoy being outdoors and engage with nature, while providing a diverse woodland habitat for wildlife. We hope this planting event and our campaign #GenerationTree will bring communities together to improve their environment and plant trees for future generations.”