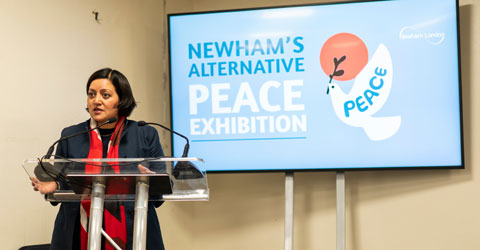 The event took place on Freemasons Road, E16 and offered visitors the opportunity to show their opposition through a range of informative talks, film screenings and poetry exploring a range of topics on conflict and peace.

Writer Maya Goodfellow opened up the event with a talk setting out why we should say no to the arms fair. She was followed by Kim Sharif from Human Rights for Yemen who provided a harrowing account of the horror of conflict. In Yemen, 14 million children have been impacted by the war led by a coalition of countries led by the Saudi state who had a delegation attending the DSEI Arms Fair.

Lyn Brown MP for West Ham also gave guests a thought provoking session on questions that she has raised in the House of Commons about arms trade, and her determination to support the council in whatever is required to stop the arms fair from happening in our borough again.

Rachel Kennerley from Friends of the Earth and Dr Oliver Belcher from Durham University looked at the carbon footprint of war with Dr Belcher pointing out that if the US military was a country, it would be the 47th highest emitter of carbon in the world.

In her talk, economist and author Ann Pettifor explored how to move away from the chaos of conflict and carbon and replace with a New Green Deal, a job process which is sustainable and promotes climate justice and peace.

Environment lawyers and climate activists Farhana Yasmin and Sam Mason looked at the theme of how to move away from the chaos of conflict and carbon.

The former Minister for Disarmament in the New Zealand government Marian Hobbs and General Secretary of the Campaign for Nuclear Disarmament Kate Hudson, highlighted the intersection between climate justice and nuclear divestment through their debate.

As part of an open mic session to conclude the event, the poet Potent Whisper demonstrated his incredible skills with lyrical riffs on redevelopment as part of the observations for peace.

The Mayor of Newham Rokhsana Fiaz who also spoke at the event said: “This was an informative and uplifting event which brought residents and expert speakers together to share their thoughts on conflict and the devastating problems it creates for people and children around the world at a time when we need to build a global movement for peace.  It’s fantastic that we were able to provide this counter event, giving people the opportunity to protest and demonstrate how opposed Newham residents are to the arms fair – it is abhorrent that it happens in this borough and I am determined to ensure it does not return.”