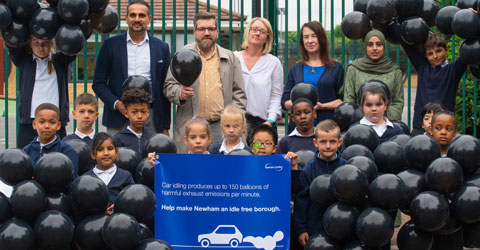 ​​Pupils at North Beckton Primary school have been learning about smart ways to tackle air pollution in the borough.

Newham Council recently declared a Climate Emergency following figures which show the borough has some of the unhealthiest air in the country.

Cllr Nekiwala said: “Toxic air is destroying our health. The effects of air pollution from vehicles are really serious, with deaths from strokes, lung cancer, asthma and heart diseases, all contributed to by dirty air. In Newham in 2017, some 7 in 100 deaths of people aged over 30 were linked to long term exposure to air pollution – the highest rates in England.

“The true cost of climate change is felt in our lungs, by our children, pregnant women and elderly residents. Pollution is all around us, but we can help to reduce it by making healthy, cleaner and sustainable choices. The cure for air pollution is really you.”

To illustrate how damaging the effect of one car can be on air quality the school children filled 150 balloons to represent the amount of dirty air produced by a single vehicle running an engine while stationary for just one minute.

Cllr Asser said: “Running the engine whilst stationary – or idling – not only costs money but adds to pollution especially in hotspots like outside schools and in congested high streets.

“Later this year the council intends to enact legislation which will ultimately allow us to fine people who continually pollute our environment in this unnecessary way, but we would rather change behaviour by educating people. I’m very grateful for the North Beckton Primary pupils for laying on this very graphic demonstration of how one small change in habits can improve air quality.”

The council is encouraging people to swap the most polluting behaviours for cleaner, greener alternatives. For short journeys, including the school run, ditching the car in favour of walking or cycling delivers a win-win by improving fitness and wellbeing.

Cllr Patel said: "It is vital to ensure that as a community we do everything in our power to tackle what is now a global climate emergency. It's not what can happen, but what is actually happening. Poor air and pollution is severely affecting the health of our residents and we must take our responsibility seriously to cut our carbon footprint and leave a legacy for future generations."

Children at North Beckton Primary are also learning cycling proficiency and bike repair skills, as well as working on ways to reduce the amount of single use plastics in school.

Head teacher Alison Helm said: “Children at primary school age are so aware and conscious of the importance of focusing on environmental things and the necessity of doing things to save the planet for the next generations. Small steps and projects with these children, like driving-less, cycling-more, removing single-use plastic, will result in a generational change. They fully understand that if everyone does a little bit, great things could happen.”