Information for those running or wishing to run a campaign in the Governance Referendum to be held in Newham on 6 May. 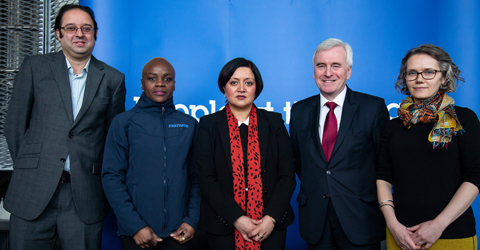 A bold and pioneering approach to drive inclusive growth in Newham that benefits all residents, addresses poverty and tackles inequality was launched by Mayor Rokhsana Fiaz today.

The Council’s new Community Wealth Building strategy demonstrates its commitment to pursuing economic, social and environmental justice; so that long-term prosperity, wellbeing and fairness for all Newham residents is achieved; and its response to the Climate Emergency is progressed.

Community Wealth Building is a rapidly growing movement in the UK and internationally that is finding new ways to address economic and social disparities in local communities that are holding people back. The strategy compliments Mayor Fiaz’s agenda of putting people at the heart of everything the Council does, as residents, small businesses and the voluntary sector will be involved in shaping Newham’s local economy.

Other speakers on the day were Happy Coman, a local resident who has benefited from the progressive practices already in place in Newham; Sam Gurney from the Trades Union Congress; and Frances Jones from the Centre for Local Economic Strategies (CLES). CLES has worked closely with the Council to help Newham take its place at the forefront of the community wealth building movement in the UK.

Mayor Fiaz said: “Community Wealth Building underpins the council’s Inclusive Economy Strategy 2020 which was approved by Cabinet on Tuesday; and sets out what actions we’ll be taking under my administration to ensure long-term prosperity, fairness and wellbeing for all residents.”

“At a time when poverty and inequality in the Borough has become even more pronounced and when the response to the climate emergency is urgent; we want to make sure that growth and investment in the borough benefits all our residents. Through our bold and pioneering approach we’ll be unleashing the potential of all parts of our community – our residents, our businesses and our voluntary sector because this is the source of wealth and talent that will drive a fairer and more prosperous Newham; where everyone has a stake.”

Through its Community Wealth Building strategy, the Council will be using its purchasing power and influence to keep wealth in Newham through leading on progressive procurement; becoming a living wage employer and promoting workers’ rights. It will also be encouraging anchor partners locally to do the same; and supporting businesses to increase the number of higher skilled, higher paid and better quality jobs for local residents. Young people will continue to be supported to have access to the very best opportunities London has to offer; and the Council will nurture a local cooperative sector in the borough which is an integral part of a broader movement for economic democracy nationally.

Read the full strategy and find out more

Watch the live stream of the launch event on Facebook​