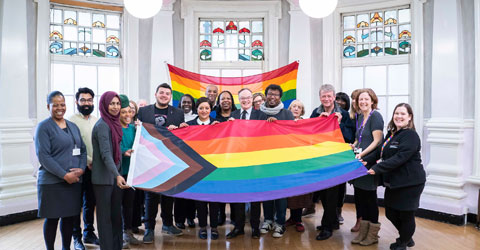 As part of the month there is a series of events and activities that recognises the contribution made by members of the Lesbian, Gay, Bisexual and Transgender community. There will also be emphasis on the need to continue to raise awareness of the prejudice many still face.

Mayor Rokhsana Fiaz said: “To mark LGBT History Month, Newham Council is proud to be flying the new Progress Rainbow flag from our town halls at Stratford and East Ham. In a month of celebration we will acknowledge the victories on equality and LGBT rights that have been won in the 50 years since the Stonewall riots of 1969.

“But we cannot be complacent. Too many people still suffer homophobic hate crime, abuse or discrimination based on sexuality and race - even at the hands of their own family and community.

“The flags we raise reflect the need for continued progress. In addition to the powerful symbol of inclusion and pride, there are additional colours representing trans, black and minority ethnic communities. These new elements form an arrow representing the need for continued progress, and for more to be achieved. We are proud to be the first London borough to adopt this Progress flag.

“It’s impossible to underestimate the scale of change the LGBT community has achieved in half a century since the Stonewall riots. From politics, to business, to the arts, the media, in education and in sport, LGBT people are more than just visible – they are leaders. But the work is not done. Newham is a thriving and diverse borough - a place where we don’t just tolerate difference, we celebrate it. This month is a reminder that we must continue our fight for equalities, and be vigilant in our efforts to tackle homophobia, transphobia and all forms of hatred and bigotry in our society.

Forthcoming events and activities include an evening of spoken word with award winning artist, Dominic Berry, at Forest Gate Library; touring exhibitions and workshops at some of Newham’s libraries organised by Queer Newham, and a conversation with Rupert Thomson, author of Never Anyone But You at Stratford Library.

For full details of all the events visit www.newham.gov.uk/LGBTmonth​​