My Newham will be unavailable from 5.30pm Friday 28 January 2022 to 9am Monday 31 January 2022 for essential upgrade works Read more about My Newham upgrade

​Mayor Rokhsana Fiaz has offered condolences on behalf of everyone at Newham Council to the family and friends of former councillor and ceremonial mayor Abdul Karim Sheikh BEM who has sadly passed away at the age of 82 having contracted Covid-19. Following his death in hospital on Sunday (12 April) he was laid to rest on Tuesday morning (14 April). 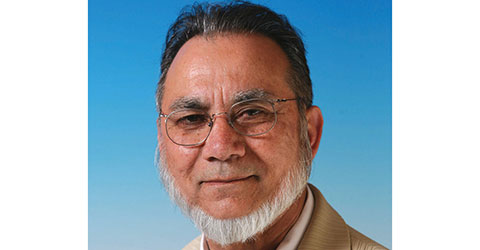 During his time on the Council he variously represented Kensington, St Stephen’s, Upton, and Green Street West wards. He served on various committees including Environment and Planning, and Housing. His distinguished service to the community was widely recognised, including the award of the British Empire Medal.

He was a highly regarded and respected member of the community, and a pioneer of community activism and an advocate of multi-culturalism. He worked with numerous voluntary sector organisations in the borough, and was a committed advocate of interfaith and inter-religious dialogue, being a founder member of the Green Street Mosque and the Newham Mosque Alliance. His dedication to public service was unstinting, as was his service to represent all voices in Newham’s diverse community.

Mayor Fiaz said: “Our thoughts and deepest sympathy go out to his family and friends at this sad time. The death of a loved one is always painful, but to know that it was caused by Covid-19 will be all the more devastating. My prayers and thoughts go to them, as to all those families grieving because of this deadly virus.

“Mr Sheikh dedicated his life to helping and supporting the community. He was actively involved in local politics before first being elected as a councillor in 1990. Throughout his long and distinguished career he brought to the Council an understanding of all the communities he was elected to represent. He is one of those people who we can genuinely say made a difference.

“After his service on the Council he continued to be an ambassador and voice for a range of community organisations who will remember him with great fondness. He will be hugely missed by all who had the pleasure of knowing him.”

Councillor Zulfiqar Ali, Cabinet member for Health and Adult Social Care, said: “Mr Sheikh’s contribution over the past 40 years to Newham paved the way for a borough of peace and harmony. He was a pioneer in community activism and helped open pathways for greater representation of all communities in Newham Council. His death will be deeply mourned by thousands of residents in Newham from all faiths and ethnicities. May his family find some solace during this difficult time.”