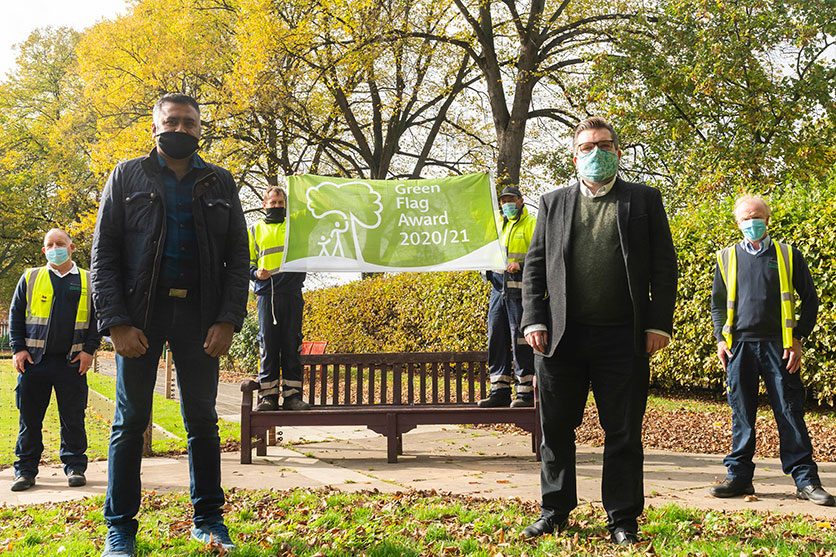 An Manor Park park has once again been given a prestigious national award that recognises the valuable service it provides to the community.

A Green Flag has been awarded to Plashet Park in Plashet Grove, Manor Park for the fifth year in a row.

The Green Flag Award scheme, managed by environmental charity Keep Britain Tidy under licence from the Ministry of Housing, Communities and Local Government, recognises and rewards well-managed parks and green spaces, setting the benchmark standard for the management of recreational outdoor spaces across the United Kingdom and around the world.

Councillor James Asser, Cabinet Member for Environment, Highways and Sustainable Transport said: “We are incredibly proud to have received this award once again, the on-going Covid-19 pandemic has truly highlighted just how valuable our parks and greenspaces are to our communities.

“They have always played a vital role as a place for people to come together, enjoy themselves and keep active, this award celebrates that and I would like to thank all those people who have helped to keep it beautiful, safe and tidy. The fact we’ve retained this award for five years is a testament to all the hard work.”

The flag was raised in the park by Councillor James Asser, Cabinet Member for Environment, Highways and Sustainable Transport, local East Ham North Ward Councillor Zuber Gulamussen and a member of the Newham Borough Council Parks Team in a small socially distanced celebration of the achievement.

Allison Ogden-Newton OBE, Chief Executive of Keep Britain Tidy, said: “We have always known just how important our parks and green spaces are for the physical and mental health of everyone.

“All the research shows that spending time in good-quality green space can improve people’s health and wellbeing that is why it is important that they are managed to the recognised standard of the Green Flag Award. This is now something that millions more recognise after the challenges of the past six months. All those involved in the Green Flag Award should be congratulated on their achievement.”