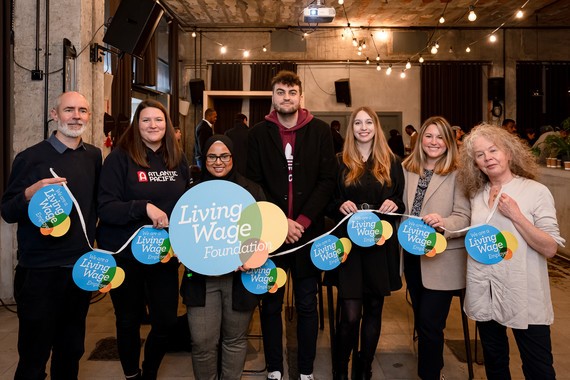 The event was to share and highlight to businesses and their staff the benefits of becoming London Living Wage accredited.

Newham Council became a London Living Wage Employer in 2021. This was a key milestone in the Mayor’s community wealth building principles of Building a Fairer Newham for tackling poverty and inequality in the borough with the aim of driving other employers to become living wage employers as well.

To date 66 organisations in the borough are accredited as Living Wage employers, helping to ensure that local economic activity benefits local people and supports their health, wellbeing and happiness.

Mayor of Newham Rokhsana Fiaz OBE said: “This is the reason why a London Living Wage – a fair wage – is so fundamental as an instrument against poverty and inequality. It makes sense for businesses embarking on the journey of being a living wage employer, as you’re going to be on the right side of history on this one.”

Claire Crill, Head of Corporate Affairs at Tate and Lyle Sugars, commented that “becoming a London Living Wage employer was the best thing we’ve done for our staff”.

Kate Sedwell, Co-founder and Chief Operating Officer at Newham-based small charity Atlantic Pacific, added: “It’s important that we ensure we are financially stable. But looking beyond that, the London Living Wage gives you so much more, with happier and more motivated staff who feel valued.”

A cornerstone of the Royal Docks Team and Royal Docks Living Wage Action Group’s work to become a Living Wage Place has been the Royal Docks Internship Programme. Local employers are supporting the next generation of talented young professionals from the borough as they start out on their careers, providing engaging and exciting placements and, most importantly, the London Living Wage.

The success and achievements of Newham’s Royal Docks interns was celebrated at the event, providing employee perspectives on the importance of being paid the London Living Wage. Dean Ammi, Royal Docks intern at Newham Music, praised its importance to him as he starts out on his career. “It enables me to sort out my expenses in life. I can plan my daily allowances while also having time to do things I enjoy and it makes me feel happy going into work every day,” he said.

Saimah Aktaar, Royal Docks intern at Newham Council, said: “As an employee who earns a London Living Wage I get to show up as my best self. With passion and conviction to carry out my work, I feel inspired to go above and beyond because the Council has invested in me by paying a decent wage.”

The rise to £10.42 per hour in the national living wage, which was announced by the Chancellor in his Autumn Statement, is still lower than the Real Living Wage which is £10.90 in the UK and £11.95 in London, based as it is on what it actually costs to live.  With the current cost of living crisis it is more important than ever that businesses and organisations support their hard working staff with a fair day’s pay for a fair day’s work.

To find out more about the London Living Wage and becoming accredited, visit www.livingwage.org.uk/what-real-living-wage