Balances shown online for council tax and rent accounts may not be accurate due to a current IT issue that is being resolved.

Any payments made since 1st February 2023 will have been received and balances will be updated as soon as possible.

Designation of an area for Selective Licensing

DESIGNATION OF AN AREA FOR SELECTIVE LICENSING

The London Borough of Newham (“Council”) in exercise of its powers under section 80 of the Housing Act 2004 has on 15 June 2017 designated an area in its district, as delineated in red on Map 1 (a), as Selective Licensing and which excludes the area shaded in green. 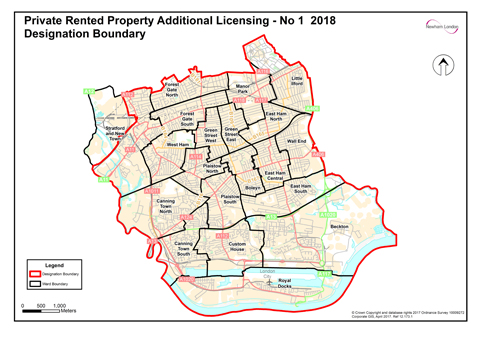 The designation applies to any privately rented property that is not a licensable house in multiple occupation and is occupied under a tenancy or a licence.

The designation may be inspected at the above address during office hours.

Upon the designation coming into force on 1 March 2018 any person who operates a licensable property without a licence, or allows a licensed property to be occupied by more households or persons other than as authorised by a licence, is liable to prosecution and upon summary conviction is liable to an unlimited fine. A person who breaches a condition of a licence is liable upon summary conviction to an unlimited fine.

For and on behalf of: